Barge, Waggoner, Sumner, and Cannon, Inc. is one of Engineering News Record’s Top 500 engineering and architecture firms in the U.S., specializing in industrial, energy, water services and environmental markets, as well as federal programs. Founded in 1955, Barge Waggoner has followed the same business strategy for nearly 60 years: build long-term relationships with clients in order to grow the organization, attract great talent, and earn a reputation for consistently delivering sound engineering and architecture solutions. The fact that Barge Waggoner is an employee-owned company directly affects its commitment to excellence in providing service to clients.

“We like to work closely with clients and ensure they receive very good customer service,” explains Paul Dougherty, chief technology officer at Barge Waggoner. “As our organization has grown, we’ve opened offices in areas where we have a strong local client base.”

Headquartered in Nashville, Tennessee, Barge Waggoner has 12 other offices in Tennessee, Alabama, Georgia and Ohio. The firm plans to open two more Georgia offices in late 2014.

In addition to having multiple office locations, Barge Waggoner used to have multiple phone systems as well. Dougherty estimates that at one time the firm had as many as 10 disparate solutions, which he calls a “hodgepodge” of NEC, ShoreTel and AT&T PBXs.

Yet all of these phone systems shared the same shortcomings: they lacked modern business features, such as email notification of voicemail and call forwarding to cell phones, and they weren’t easily scalable up or down.

“Our company is affected by macroeconomics, just as many businesses are today,” says Dougherty. “We wanted the ability to quickly add users and offices during expansion, and to scale back during downturns. There’s no point investing in expensive PBX hardware we might not be able to use in the future.”

Having disparate PBXs in different locations also made it more difficult for employees in one office to communicate with coworkers in another. This problem was exacerbated five years ago when Barge Waggoner reorganized to focus on vertical markets rather than geographic territories. That meant that employees specializing in areas like manufacturing process and water plant design needed to collaborate with colleagues throughout the firm, not just in their own local offices.

“We wanted to use the talent we have anywhere,” explained Dougherty. “To align our business vertically, we needed a unified communications solution that could overcome geography and enable our specialists to consult with other employees easily.”

“8x8 allows us to set up our phone system to meet the needs of each office and the individuals who work there.”

Dougherty initially considered purchasing and installing an on-premises PBX system to unify Barge Waggoner on one telephony platform, but the required capital expenditure gave him pause. So did the lack of scalability.

“After evaluating the cost of the hardwarebased PBX system, I wanted to reduce our CAPEX and move toward a predictable monthly expense for phone service,” he says. “I also realized that moving to a hosted solution would allow us to buy only what we needed, without having to invest in excess hardware.”

Dougherty and team investigated multiple solutions from leading vendors, including Cisco, AT&T and Microsoft, before concluding that most were too expensive, too complicated (one required six virtual servers), or not reliable enough for Barge Waggoner. While reviewing a Gartner Magic Quadrant report on unified communications, Dougherty saw 8x8 named as a market leader—and realized he had heard of the company before.

“About a year earlier I had heard Jim Cramer interview 8x8’s CEO on his Mad Money show,” recalled Dougherty. “It struck me at the time that 8x8 was a company to keep an eye on. Then, when I saw them again in Gartner’s Magic Quadrant, I knew we needed to check out their solution.” 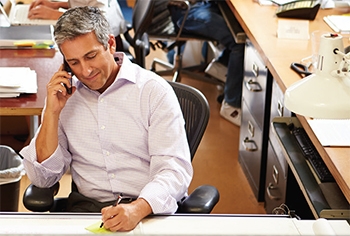 After contacting the 8x8 enterprise team, Dougherty and his team agreed to pilot 8x8 unified communications at one Barge Waggoner office. Initially there were some technical challenges, but 8x8 helped Barge Waggoner strengthen its network to reduce latency. Users were so happy to have modern business phone service that they didn’t mind the occasional glitches.

“There was a lot of love for all the new phone features and we decided to move forward with 8x8,” said Dougherty. “Our original plan was to implement 8x8 only in the Barge Waggoner offices where it was needed most, but momentum started to build, and we ended up canceling some phone service contracts early and replacing PBX hardware that wasn’t even fully depreciated so we could standardize the whole company on 8x8 unified communications.”

To ensure a smooth rollout across the distributed organization, Dougherty and his team introduced 8x8 to a different office every three to four weeks. Within a year, all 12 Barge Waggoner offices were fully deployed.

8x8 Unified Communications Enhance Collaboration Inside and Out

Now that the firm has standardized on 8x8 unified communications across all 12 locations, its talented specialists can easily collaborate with colleagues in other offices, regardless of geographic location. Standard 8x8 virtual PBX features such as four-digit dialing between offices and a companywide directory on every desktop allow employees to quickly reach colleagues anywhere in the firm. Conference bridges, also included as part of the standard unified communications service, have eliminated additional charges for third-party conferencing services.

The firm’s external communications have been dramatically enhanced as well. According to Dougherty, 8x8 has “transformed how we interact with clients and other stakeholders.” Employees can now receive and place business calls on their smartphones using the 8x8 mobile app, which makes it appear as if they are using their office phones. Email notification of voicemail lets employees know when they have voice messages—and caller ID indicates who left the message, greatly enhancing responsiveness to clients.

One Virtual PBX, Many Possibilities

The flexibility of the 8x8 virtual PBX easily enables customized configurations for all the firm’s locations. For example, some offices allow direct inward dial (DID) calls to go straight to the call recipient; others set up ring groups and have a receptionist answer calls before transferring them to the recipient.

“8x8 allows us to set up our phone system to meet the needs of each office and the individuals who work there,” said Dougherty. “Every time we rolled out 8x8 to a new location, an 8x8 sales engineer would come on site to train users and answer our questions. All we had to say is ‘we want the system to do this,’ and he helped us find the answer.”

Time to Deploy:
2-3 weeks per location

Reason for Choosing 8x8:
Wanted a hosted solution to better unify the company and enable better collaboration for a monthly cost that would incrementally track with growth