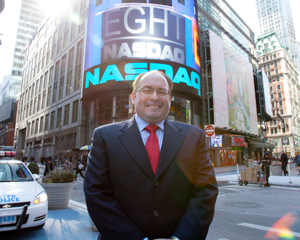 This article was written by Erik Linask of TMCnet on February 11, 2009, reporting a recap from the Miami ITExpo show.

Despite Economy, 8x8 Grows to More Than 15,000 Business VoIP Customers

When you consider the impact of a struggling economy on the business world, you don’t have to look far to find a large number of businesses that are laying off staff or even folding completely. But, if you turn your attention to the VoIP industry, there is clear evidence that the economic climate can present an opportunity for a well managed vendor or service provider. In fact, if you were in Miami last week for ITEXPO, you witnessed more than 8,300 attendees discovering how they can leverage VoIP technology to help them navigate the turbulent economy.

Bryan Martin, Chairman and CEO of 8x8 confirmed that notion: “I think you’ve always had those people coming, but I had the sense we were getting them in greater numbers in Miami. People were searching for these solutions and how they would enable them to run their businesses more effectively and save money at the same time.”
Providing a solution — Virtual Office hosted IP PBX ( News – Alert) — that Martin calls countercyclical to the economy, 8x8 has been able to not only weather the challenging environment, but actually grow its customer base to more than 15,000 businesses as of the end of last month. In fact, over the past 24 months, the company says its business customer base has tripled, primarily on the strength of Virtual Office, which offers IP-based communications with enterprise-class PBX features and calling charges significantly lower than traditional PSTN services.
So where does 8x8 ( News – Alert) go with this opportunity? Martin and Joan Citelli, Director of Corporate Communications for the company, believe they have built a sustainable business model, even in the current climate. In fact, Martin says the small business market is actually growing today, which further extends the opportunity for 8x8. 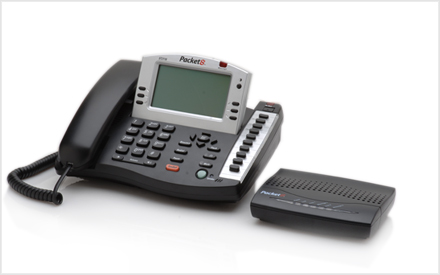 According to Citelli, the primary draw, as expected, is the cost factor, that a hosted VoIP system is going to cost significantly less for small businesses than either their legacy systems or on-premises IP PBXs. This somewhat contradicts the trend in the IP Communications space of late, where the focus has shifted to features and soft benefits of VoIP and Unified Communications ( News – Alert).
But, the economy has shifted the focus back to cost, and 8x8 adjusted its message some nine months ago to leverage the cost benefits of its solutions.
“We radically changed our message to, ‘Let us show you how we can save you money,’” said Martin. “The quotes we send out emphasize that messaging, that it’s about saving your business money in these difficult times.”
While the bulk of 8x8’s growth has come from the Virtual Office solution, it also now offers an IP Trunking service (Packet8 Virtual Trunking), which Martin says resulted from a significant number of customers looking to keep their existing equipment, but looking to win the cost benefits of VoIP nevertheless.
It also has recently added the Packet8 Hosted Key System alternative, which combines the familiarity of traditional key systems with the cost savings of VoIP. To date, the majority of the Hosted Key System deployments have come from existing key system users who wanted a solution that mimics their existing system. But, Martin explained that where the solution really can add value is in conjunction with Virtual Office, allowing customers to create key system call groups within a corporate PBX environment.
“I’m talking about a virtualized version of the traditional key system, where the phones in the key system can be anywhere off-site, or you can have your offices using Virtual Office and, within a subset of those users, you can to create a key system that resides within your PBX,” he said.
To illustrate the latter, he gave an on-site demo to TMC’s Greg Galitzine at ITEXPO, with a three-phone key system group connected to the company’s PBX in Santa Clara, California. The solution was named a Best of Show winner, for Most Innovative Product at the show.
Still, despite the continued growth — as well as a reduction in customer churn, which 8x8’s vice president of Business and Channel Development Huw Rees ( News – Alert) discussed at ITEXPO — the single greatest challenge remains actually getting in front of the small business owner.
Martin says that most small business owners don’t know how much they spend on telecom each month, which makes it more difficult for them to appreciate the cost savings, but they are more interested in cost than features today.
So, explained Citelli, “The idea is to get their attention with the idea that VoIP can save them money. Then they explore further and see that it truly is reliable now, and they can get great features not available with their legacy services.”
Martin says the VoIP industry as a whole is making progress in that regard, and once the business owner realizes the combination of savings and features available, closing the sale becomes relatively easy for them.
“That’s still the challenge,” he says. “There are plenty of businesses out there, and once we get them to understand, a light bulb goes off.”
That proverbial light bulb now been lit more than 15,000 times and, with the addition of its Virtual Trunking offering and Packet8 Hosted Key System to its flagship Virtual Office solution, Martin cautiously believes 8x8 will continue to thrive, despite the economy. There is no evidence to suggest he is wrong.

Erik Linask ( News – Alert) is Group Managing Editor of TMCnet, which brings news and compelling feature articles, podcasts, and videos to nearly 3,000,000 visitors each month. To see more of his articles, please visit his columnist page.