Bad Meetings Go Back Further than You Think: 4 Tips to Improve Them 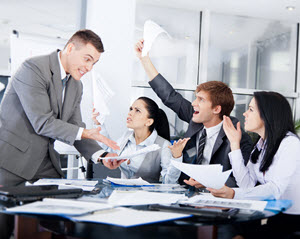 The longer I work in Silicon Valley—home of what seems like constant change at a blinding pace—the more I realize how little things have changed. Take, for example, bad meetings.

Ancient documents like the Bible tried to warn us about them—along with war, pestilence, plagues and big guys named Goliath. We just weren’t smart enough to understand all the warning labels.

Consider this passage from Genesis:

“The whole world had one language and a common speech…Then they said, ‘Come, let us build ourselves a city, with a tower that reaches to the heavens, so that we may make a name for ourselves.’”

It was, in other words, the world’s first recorded startup venture.

“The Lord said, ‘If as one people speaking the same language they have begun to do this, then nothing they plan to do will be impossible for them.  Come, let us go down and confuse their language so they will not understand each other.’”

It was also, apparently, the first functional team meeting.

The end of the story tells us that the participants were scattered them over the face of the whole earth. Are there Tower-of-Babel descendants lurking in your conference room?

As Dave Barry once said—and I am not making this up— “If you had to identify, in one word, the reason why the human race has not achieved, and never will achieve, its full potential, that word would be ‘meetings.’”

So at the beginning of the New Millennium, most professionals know that nothing can kill collaboration and creativity more quickly—or make people want to bail on your projects faster—than a meeting that spirals out of control.

I belong to Toastmasters, a 91-year-old organization that has 14,650 clubs worldwide. Most of them meet weekly for about an hour, which averages out to about 2,100 meetings per day. Still, more than 313,000 members (and growing) feel they get enough out of their meetings to attend regularly. Some of these tips come from observing Toastmasters meetings around the world; others come from observations of successful (and not-so-successful) meetings in Silicon Valley.

So if you’ve ever had a meeting go off the rails—and wondered why—here are some tips for your next online or face-to-face meeting.

Don’t Give Up—No Matter How Scary that Tower Looks

Of course, there’s no magical solution to people’s imperfect ability to organize and communicate—since clearly people have been lamenting this problem since the dawn of Western civilization. But that’s no reason to give up, and perhaps these tips can keep your next meeting from deteriorating into a first-class tower of you-know-what. (Babel, of course.)

Click here for more information on how the latest in web and video conferencing technology can help your teams communicate and collaborate more effectively—no matter where they are or what device they’re using. And for more tips on mastering impromptu speaking situations that sometimes confound businesspeople, click here.