The largest bowling entertainment operator in the UK, Hollywood bowl is focussed on delivering the best leisure experience for every customer and inspiring them to become loyal fans of their brands. Using the 8x8 X Series platform, ensures that their business model delivers value through continually investing in the enhancement of our customers’ experience.

In contrast, its telephone systems used to be positively downbeat. There were different PBXs with obsolete tariffs and a mixture of handsets, many of which were end of life. Some systems were unsupported and the remaining 15 service contracts were expensive. Outages and poor quality were regular occurrences on soon-to-be-phased-out ISDN lines.

“We didn’t even have an inventory because the phone systems were so old and fragmented,” says IT Director, Dave Wilson. “It was frustrating for our centres’ teams and customers too.”

A striking match for a growing business

Matters came to a head when the acquisition of Bowlplex brought yet another telephone system on a network surplus to requirements. A discussion with the company’s IT provider led to a demo of the 8x8 X Series cloud-based unified communications platform.

Having looked at three contenders, Hollywood Bowl opted to trial the 8x8 platform. The X Series was an instant hit. “We ran a proof of concept for six months at our central support office in Hemel Hempstead,” Dave explains. “It was very quickly decided that the X Series was the right solution for us based on cost, licensing and functionality.”

The rollout began in the 11 former Bowlplex venues then moved to the support office, the other venues and the contact centre. Because the cloud-based X Series is so easy to implement, the Hollywood Bowl IT team was able to keep some work phases in-house. Their IT partner handled the first and final stages including training and ongoing support. 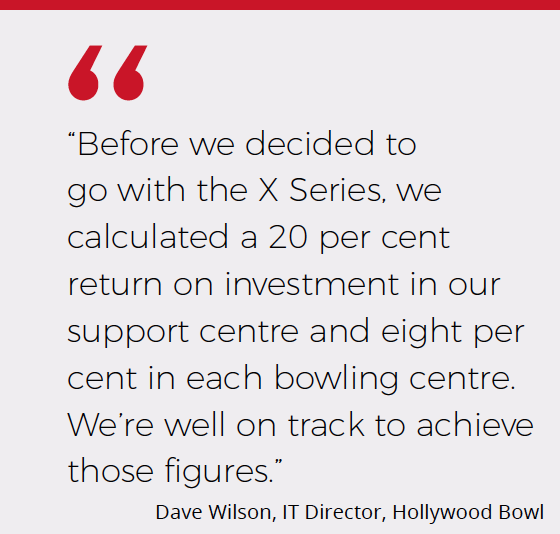 Customer-facing team members at the centres now have flexible communications they can rely on. Intuitive new handsets function perfectly, and softphones on mobile devices enable people to answer calls or ring colleagues while working away from their desks.

Auto attendant technology has streamlined call handling in Hemel Hempstead and freed up receptionists for other tasks. Audio and video conferencing, group chats and instant messaging help managers collaborate better. They can use softphones to work from home or on the move. Productivity has risen as a result.

And all team members can use the mobile device of their choice on the system-agnostic X Series. “Our team members love it,” Stacie says. But the biggest winners are Hollywood Bowl customers, who get a great experience every time they phone the company. “Call drop out problems and poor voice quality are things of the past,” Stacie adds

A web-based configuration manager enables the internal IT team to diagnose faults, analyse data and make real-time changes. They can also provide first-level support which increases efficiency. “Thanks to the 8x8 portal, we’re self sufficient in terms of administration and reporting,” says Dave.

The 8x8 platform is billed on a pay-as-you-go tariff that includes the hardware and has reduced cost of ownership by 45 per cent in each bowling centre and 17 per cent in the Hemel Hempstead support centre. In terms of the number of telephony-related issues reported into the service desk, the IT team is seeing an 80 per cent reduction.

“The X Series is much more cost effective,” says Dave. “Before we decided to go with the X Series, we calculated a 20 per cent return on investment in our support centre and eight per cent in each bowling centre. We’re well on track to achieve those figures.”