New report shows while many practices have adopted technology, productivity still an issue

A new, nationwide study of recruitment consultants finds that despite a substantial desire to integrate new technology into established processes, the average consultant still wastes more than 10 hours every week1.

The study, commissioned by 8x8, provider of the world’s first Communications Cloud, surveyed 500 recruitment consultants in the UK, to uncover which working practices are wasting time and budgets within the industry.

Recruiters say the biggest drain on resources is manually updating CRM systems, with consultants spending an average of four hours per week inputting information, because there’s no ability to integrate with phone systems.

Nearly three quarters (72%) also worry that mistakes are being made when transferring the data, affecting client relationships and impacting decision making.

While many companies encourage consultants to hit the phones first thing in the morning, the study reveals only 4% believe this time of day is when calls are most successful. Furthermore, one in six (17%) say the practice of making a certain number of calls in core hours, i.e. before 9am, is ‘old-fashioned’. With an average of two hours per week wasted calling candidates who don’t pick up or are at work and unable to speak, it’s no surprise that 76% are keen to access analytics that would help them pinpoint exactly what times the most successful calls are made.

The research also reveals the flexible working revolution has been slow to reach the recruitment industry – 63% are worried about working away from the office in case they miss vital calls, yet, if they could pick up calls to their office phone anywhere, from their mobile or laptop, an overwhelming majority (96%), would feel more comfortable working remotely.

Technology is already improving consultant productivity in some areas. Six in ten already listen in to successful or unsuccessful calls to establish best practice and a third (34%) would like the ability to do so in future. In addition, almost half (49%) of the recruiters surveyed are already using messaging apps to communicate with clients and candidates and a further 36% would like to do so.

“While many recruiters are already using technology to increase productivity and improve the experience for both clients and candidates, a significant number have yet to take full advantage, said Kevin Scott-Cowell, UK MD 8x8.

“By making sure they have the right communications technology in place that can integrate with existing systems, recruiters can get the full picture of their interactions with clients and candidates, all in one place. This means less time spent transferring data between systems and travelling between meetings and the ability to track agent productivity using analytics. With the advent of cloud-based technology, this doesn’t have to be a huge financial commitment, but will undoubtedly help recruiters to work more productively.”

1All data based on research conducted by 3GEM, on behalf of 8x8 surveying 500 recruitment consultants, comprising MDs, managers and consultants in August 2017.As part of the research respondents were asked how many hours they wasted on particular tasks. The eleven hours is broken down as: 4 hours updating CRM systems manually; 5 hours visiting poor candidates that weren’t properly screened; 2 hours calling candidates who don’t pick up or can’t talk because they’re at work. 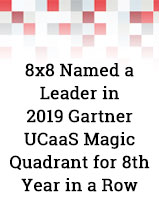